The third theoretical round table: Social clientelism and "contradictory social mosaic" as a framework for the development of public policies in Croatia 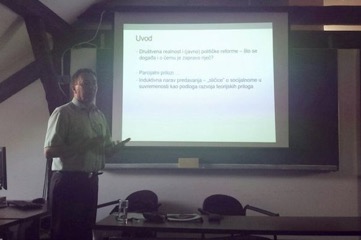 Institute of Public Administration organized its third scientific debate in the field of public administration intended for all its members - academics, professors, assistants, PhD students and graduate students of public administration, political science, law, social work, economics and other social sciences, but also to experts-practitioners of public sector employees, who want to expand their existing knowledge and apply it to gain new insights into their daily duties.

The idea and the goal of this type of round table is an exchange of know-how on a particular topic from a scientific standpoint. Modern theoretical and doctrinal orientations, concepts and frameworks discussed at the round table are necessary in modern economic and social conditions in European countries for understanding and/or interpretation of the organization and functioning of the public administration. Round tables are structured in a way that one speaker (usually a member of the academic community) holds a presentation on a specific topic, after which the audience makes comments and the discussion follows.

Previously there have been two such scientific discussions, the first on "Problems of understanding and interpretation in social empirical sciences“ whose keynote speaker was professor emeritus Stjepan Ivanišević, Ph.D., Department of Administrative Science, Faculty of Law in Zagreb and the second on " Research Strategy in the Social Sciences", held by prof. Duško Sekulić, Ph.D. from the Department of Sociology at the Faculty of Law in Zagreb. The third theoretical round table was held on June 1st 2016 in the building of the Faculty of Law, Ćirilometodska 4, where the introductory exhibited prof. Ph. D. Siniša Zrinščak from the Department of Sociology, Faculty of Law, University of Zagreb on the subject of Social clientelism and "contradictory social mosaic" as a framework for the development of public policies in Croatia.

Zrinščak presented his thesis that the ideas of reforms explicitly or implicitly based on the general theoretical perspective of modernization and Europeanization fail to adequately justify and implement the reforms. The first aspect of this thesis is theoretical and based on the inadequacy of the theory of modernization and cognitive Europeanization (the classical welfare state model in particular) to understand the development of a social policy that is, contrary to these theories, contradictory, ambiguous, inconsistent and subject to very different ideological influences. The welfare state model, as developed by Esping-Andersen, in postindustrial society becomes dual: the core of the labor force in a country (its citizens) are protected by the institutions of social security, while other social groups (immigrants, asylum seekers, etc.) are not. Zrinščak questions the dominant theoretical framework of analysis - the dichotomy Europeanization – retraditionalization. The former has not so much contributed to the radical shift in public policy in transition countries as much as it has to the institutional reforms. Retraditionalization is the wrong approach because it assumes the existence of a previous modernization phase, which often falls behind. Another aspect is the effort to understand the Croatian welfare state as social clientelistic; although still insufficiently theoretically and empirically based, it can reveal structural embededness of some important features of the development of the welfare state in Croatia. The social clientelism according Zrinščak developed by "trapped" (captured) social policy in which the limited resources there is very little room for maneuver in which their interests have imposed two social skupine- pensioners and veterans, that their political support certain political option conditional on the achievement of some material benefits (money, services, rights).

Participants highlighted some interesting issues during the discussion: what motivates the formation of public policy: social needs or political production; is it possible to put forward a rational public policy or is the constant power game, depleting social wealth, for the purposes of settlement of numerous conflicting interest, making it impossible? Who is more important: actors or institutions; are factors outside administrative organizations (environment) more important than what is going on in them?

Some conclusions were presented regarding the need for new concepts and units of analysis that could affect the informal relationships that actually work in addition to or past the formal institutional arrangements (eg, self-help as the foundation of local solidarity in social policies of South European countries), where concept of liberalism is no longer sufficient. Informal relationships cease to be excesses, and it is not possible to talk about linear (phase) development if in reality we perceive regression. Furthermore, we cannot rely on global trends if the core values ​​of administrative doctrines differ from country to country, and if there is a constant need to always "learn anew“ due to intergenerational misunderstanding.